We Will NEVER Forget 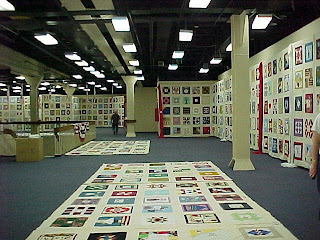 The quilt panels above are just a few of the more than 160 panels that were made to honor all those who died on 9/11. I was one of many from all over the World who helped to make a quilt block for every person who died on 9/11. I traveled to Long Beach, CA several times to work on the quilt panels in 2002. The idea was born by Corey Gammel and Peter Marquez, LongBeach, Ca.

The first showing of the completed panels was on August 30 - September 1, 2002 on the Queen Mary. The quilt panels (16,000 square feet ) (if aligned end to end would stretch across a quarter-mile) tours all across the country and was finished in 11 months. It was largely done as a grass-roots effort. Over 3,600 volunteers from every State in the United States and 18 countries contributed to the assembly of the quilt panels. 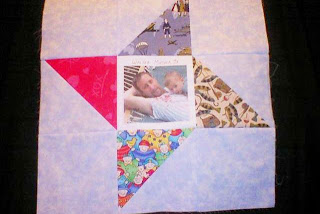 This is the quilt block I made to honor Walter Matuza, Jr, New York resident. He was the father of 3 boys, killed in the Trade Center. Each section represents Walter's life: he served in the armed forces; family fishing trips, loved playing with his 3 boys and cherished his wife dearly.

Please take a moment to remember all of the families who lost so much 9/11/2001.

Posted by SandyQuilts at 1:01 PM

It could widen my imagination towards the things that you are posting.

i think you add more info about it.