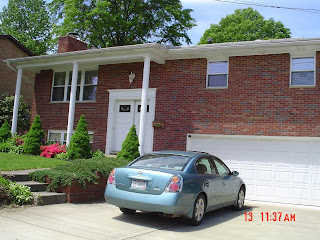 We moved here in 2002 and for 6 years I've hated the landscape. Since I'm not an outdoors person I just kept saying .... "next year we'll do the landscape work". Then in Dec. 2007 we had a water line break which caused water to leak into our family room. The water line broke out next to the street. There's nothing like not having water over the Christmas holiday ....... yes there's nothing like it. 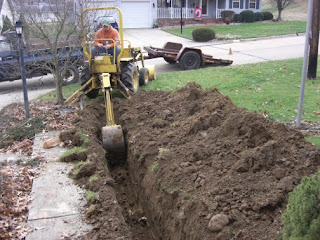 The broken water line was under our concrete sidewalk ..... So bright and early Dec. 31 (our 41st wedding anniversary) the plumbers were able to fit us into the schedule .... we spent the whole day together. If you're interested the whole story is further down in my blog.

River rock we love so he brought in 6 ton and covered everything. Did you notice how I changed the layout with that nice curve. 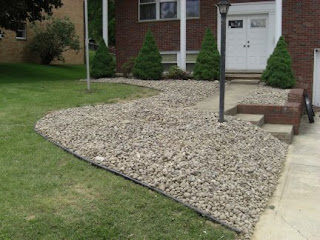 The we shopped for some plants and a huge pot of pre-planted flowers. We spent 3 hours planting day lily, hosta, oriental grass, creeping jenny, portulaca and some nice decorative rocks. 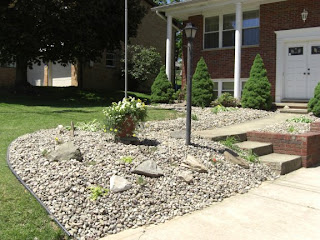 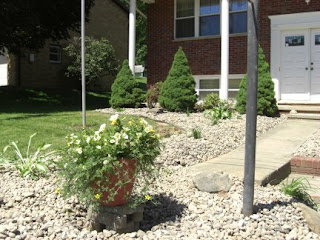 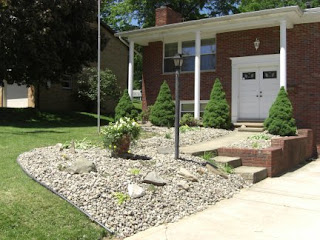 We had tons of Iris in the front too .... so I had Shaun move them to a little corner garden with Mickey & Minnie Mouse in the backyard. I do hope they survive. 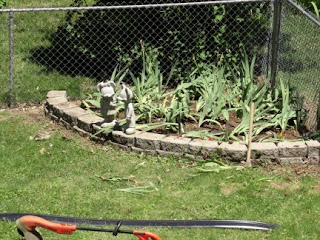 We also have a very large fish pond in the backyard .... compliments of the former owners. It was so overgrown you couldn't see the water or fish (koi and gold fish). So DH tore out a lot of the old plantings ... now we have a nice view. 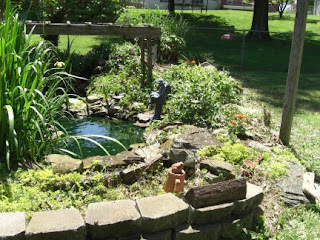 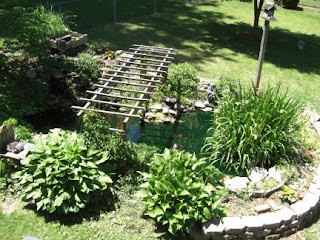 The pond has a beautiful waterfall but unfortunately it's in the shade and difficult to get a photo. 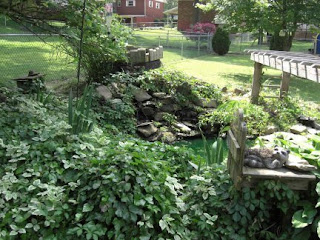 This is a Siberian iris (thanks Vicki). It grows inside the pond and returns bigger every year. I think this year we'll have to separate it after the season is over. 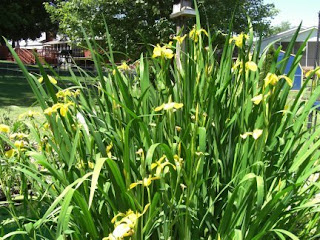 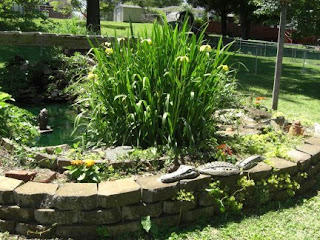 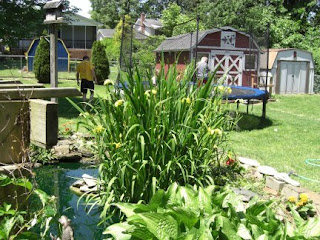 Posted by SandyQuilts at 3:14 PM

That is absolutely lovely!!! Thank you for the pictures. I think you've done a great job on the front and I just love the back, too.

Surely someone will tell you what that plant is. Our neighbors have one by the water but it was there when they moved in and they aren't plant people so I doubt they know what it is.

It is beautiful! I believe you have Siberian iris there by your pond.

WOW, you folks have really been working. Everything looks beautiful. You really changed the looks of the front of the house and it's very inviting.
Carolyn (giveme03)

Looks great Sandy and I like the curve - makes it much more pleasing to the eye. You'll have to take a picture at the end of the summer when all the plants have grown. It will be gorgeous!