Guess Who Is In the News 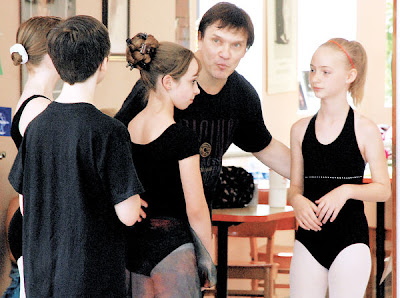 Ballet students in the Mid-Ohio Valley had a chance Sunday to learn a little something from a world-renowned dancer.

Lantratov, who has had a distinguished career as a dancer in the companies of Vladimir Vasiliev, Maya Plitsetskaya and Ekaterina Maximova and international tours with Rudolf Nureyev, showed local students a number of moves, worked with them on their techniques and instructed them in other aspects of the dance. The 90-minute session occurred at the Schrader studio in downtown.

A graduate of the Moscow Academic Choreographic College, Lantratov was selected as a first soloist with the Moscow Stanislavski Ballet. He is known for his strong technique, personality and expressiveness.

In 1993, Lantratov began working for the Kremlin Ballet. This same year, he formed the Russian National Ballet Foundation. He has toured as a solo guest artist in such countries as Japan, Germany, Italy, Greece, France, Portugal, Spain and the United States. The Russian National Ballet Foundation has toured in Europe, Asia, The Middle East and the U.S.

With the help of Luba, a woman originally from Russia now living in the area acting as an interpreter, Lantratov said Russian dance shows more expression and emotion.
"It is technical, emotional and that is what it is famous for," he said. "It is art. It teaches culture. It teaches the beauty of the art."

While here Sunday, Lantratov went over coordination, physical endurance, strength and more with the local students. "The young girls tried some new jumps," he said.

The students were eager to learn from someone with Lantratov's experience.
"It was really cool to be able to work with some outside people,'" said Mallory, of Meigs County. "I had a really great time."

Esther, of Marietta, said she was amazed by Lantratov's ability and insights.
"He is very knowledgeable about ballet," she said. "He is very inspirational.
"He said to dance with your heart every time and we all needed to be reminded of that."
Lantratov commended the work the local instructors have done with the students.
"I really liked and enjoyed the level and the quality of the education of the Schrader's ballet studio and I would like to congratulate the teachers," he said. "They are attentive students. That is very good." Lantratov said he liked to teach ballet to young students.

"I like to give them my experience, show them my experience and give them all the best I have," he said. "I would like them to remember and to catch that idea of style and manner of movement. I want them to hear the music first then apply their physical body to the music so it would be a symbiosis of both and then they would get the best result."

Posted by SandyQuilts at 8:03 AM